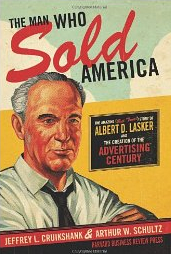 Albert Lasker was surely one of the most fascinating advertising figures of the 20th Century.

At the age of 12, he wrote, edited and owned a newspaper: the Galveston Free Press.

When he moved to Chicago at the turn of the 20th Century, the teenager took the tiny agency, Lord & Thomas, by storm. He became a client-getting magnet and within a few years, he increased his partial stake in the firm to sole ownership.

Now, there’s a new book about him called: The Man Who Sold America: The Amazing (but True!) Story of Albert D. Lasker and the Creation of the Advertising Century by Jeffrey L. Cruikshank and Arthur W. Schultz.

I amazoned my copy as soon as I read Ken Roman’s book review in the Wall Street Journal on Friday.