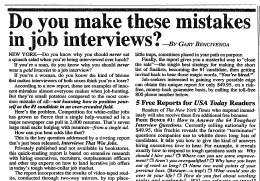 A client consulted with me recently about an online sales letter and autoresponder campaign.

He told me the sales letter used to convert like gangbusters but now it was on life support.

Usually, it takes some probing to get to the cause of such a change in events, but a quick glance at his sales letter revealed the problem in moments.

But the sales page had a bad case of a common malady called bonusitis.

It’s the condition of lumping unrelated and often unappealing bonuses together to increase response to the main product.

In the world of mail order and space advertising, you’d be hard pressed to find a bundle with diverse bonuses in options trading, knitting and gardening strewn together, but as you’ve likely seen in the Internet realm, this is all too common.

For one thing, online product launches, with their promise of big commissions, induce many list owners to offer bonuses so they can snag affiliate commissions ahead of their competition. They may not be as uncorrelated as options trading and knitting, but prospects sense when products and bonuses do not compute — and they don’t buy.

In addition, even if the list owner has not tossed something random together and is offering an incentive of genuine worth, his bonus often relates in no way to the main product, nor does it enhance its value.

Here’s the second cause of bonusitis.

Almost anyone can buy the rights to a seemingly infinite number of downloadable products. Many dabblers believe just because they can bundle these with their own offers, that it’s a good idea. Usually, they know very little about these peripheral products and that comes screaming though in the copy.

So, knowing what I knew, I offered my…

“Instant” has always been a popular (and profitable) word to throw around in direct response. Gene Schwartz even named one of his companies Instant Improvement.

Fortunately, the cure for most cases of bonusitis is as instant as Ramen noodles.

On further questioning, the client admitted that as sales were falling, he added even more bonus widgets to try to prop up response.

But this had the opposite effect: the more heft he added, the more prospects were turned off.

I had an easy, two-step solution for him that let him self-remedy the problem without a lick of work on my end.

Step 1: Though he was reluctant to do so, I told him to scrap all the bonuses and restore the page to its earlier version before bonusitis crept in. Almost immediately, the page began generating sales again.

Step 2: Next, I showed him an ad, that if properly understood, would keep future bouts of bonusitis from occurring.

The ad was written by my copy mentor, Gary Bencivenga, during the throes of the last recession and high unemployment of the 1990s.

It’s a textbook ad that shows…

The Art Of The Bonus

Crafting the right bonus and expressing it in copy is an art form and I know of few ads that demonstrate it as well as this ad of Gary Bencivenga’s.

Notice how the 5 Free Reports not only relate to and enhance the value of the main product, but how any of the reports alone could drive the sale for a job seeker reading this ad.

And just as Gary mentions in the Do you make these mistakes in job interviews? ad, one of the bonuses, How To Answer the 64 Toughest Interview Questions, was in fact presented as the lead product in a version of the ad which ran in Kiplinger’s in 1994.

When you compare these ads side-by-side, you’ll notice the possibilities of creating and positioning bonuses more desirable than the main product are almost endless.

Actually, I’ve been waiting for Gary to re-release this offer for the last two years since there’s no reason this product wouldn’t sell as well today. Oh well, I’ll content myself with my upcoming annual review of the Bencivenga 100 Seminar.