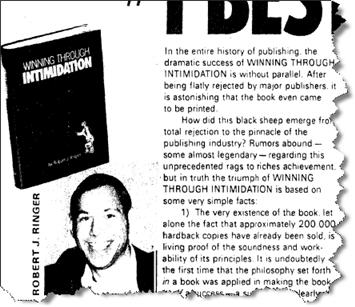 Robert Ringer reminds me of the director at the all boys high school I attended who was ominously named, “the dean of men.”

My friends and I adapted to the constant anxiety of being cornered by him for smoking, drinking or some other expulsion-worthy infraction. Fortunately, most of us dodged the mines.

Flash forward a decade to my first encounter with Robert Ringer and his best selling, “Winning Through Intimidation.”

Robert is certainly not the sort of fellow I would have relished meeting in my adolescent years. But I’ve learned and applied a wealth of actionable concepts from him that continue to serve me well in adulthood.

Robert Ringer is definitely not for everyone.

I’ve subscribed to just about every teleseminar he’s conducted over the last two years and he often comes off as an overbearing, intolerant and cantankerous old fart. Kind of like my high school director. Not only does he not suffer fools gladly, but it’s likely he’s not named “Ringer” for nothing.

I can easily imagine some poor soul getting his neck “wrung” by rubbing Robert the wrong way on an elevator.

But I keep coming back for more.

I’ve already added his upcoming teleseminar in January to my list. (Not an affiliate link.)

For the first time in a long while, after reading Robert’s ad, I connected with an advertising claim. Sure, I buy a lot of stuff and likely would have gone for this anyway.

The quickest way to change one thing is to change everything.

It’s not so well know that Robert Ringer is a gifted advertising copywriter as well as a bestselling non-fiction writer.

I’m looking forward to his forthcoming teleseminar. One of the MP3 bonuses I listend to at the gym last night was worth the whole price.