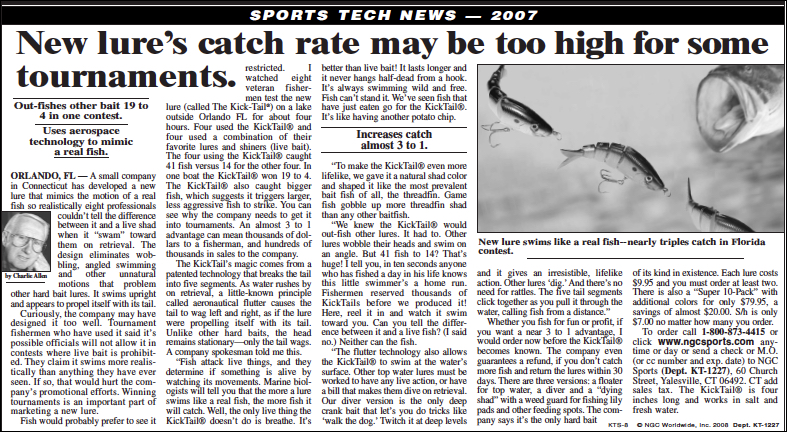 This was one of the most successful advertorial series of all time.

NGC Sports were BIG TIME in sport fishing and golf and had TENS of thousands of insertions in everything from local newspapers… to trade publications like Oklahoma Farm Bureau… all the way to Newsweek magazine and the Wall Street Journal.

These are advertorials that would make John Caples PROUD.

What happened to them?

It could be the company’s margin was eaten away by the ascent of e-commerce and not enough diversified media… or it could be the even more likely lack of a succession plan… far too common in most small businesses.

NGC’s last print ads ran in 2010 and the plug was pulled on its domains, ScientificGolfClubs (dot) com and ScientificFishing (dot) com, in 2018.

But just as Colonel Algren replied to the Emperor in The Last Samurai to the question of how Katsumoto died… I will tell you how NGC lived!

NGC stuck with what worked!

Notice there is NO coupon in their insertions.

NGC’s bread and butter was the half-page display ad.

But they never shirked away from the full page when they could get the right media buys… and in some pretty big national media.

And these remarkably similar leads in different markets worked for them like a charm… uh, make that a lure.

New golf club’s secret metal may hit too far on some par-4’s.

New lure’s catch rate may be too high for some tournaments.