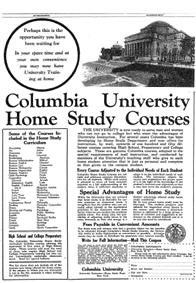 Is home study marketing the wave of the future?

It’s got a few things going for it.

First, it plays to the “cocooning” behavior that happens during economic downturns. The term became popular during the last major recession of the 1990’s.

Second, the idea of self-improvement and retraining strikes a mass cord during such cycles.

Third, home study courses have a high degree of inelasticity and can easily command hundreds to thousands of dollars. A “home study course” purchase is a lot easier to justify to one’s spouse than a mere few DVD’s and some manuals.

This was a popular insertion for Columbia University Home Study Courses from the 1920’s.