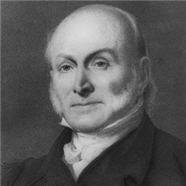 Sixth President of the United States, John Quincy Adams, may have died in 1848 but that doesn’t stop the man from tweeting.

In an elegant little PR stroke, the Massachusetts Historical Society has launched a Twitter account, JQAdams_MHS, and has officially started tweeting Adams’ personal diary entries, beginning with his trip to Russia on August 5, 1809 as U.S. Minister to Russia.