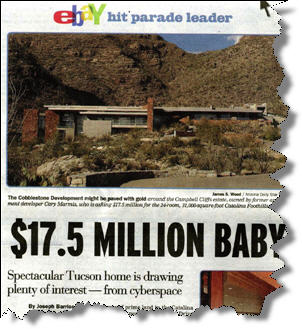 Here’s a free publicity case study I’ve been meaning to post for a while.

Years ago, when I first heard marketing consultant, Jay Abraham, talk about getting control of a marketing asset you don’t posses, I understood the concept but didn’t have the faintest idea how to execute it.

Here’s a paint-by-the-numbers way to do it and how it resulted in over $52,000 in traceable business for my most important client at the time: my wife.

But to really grasp the nuances of what I’m about to share, you’ll need to imagine a world quite different from ours today.

And it’d help if you’re acquainted with Bizarro World in D.C. Comics — the place where incompetence is rewarded, stupidity is praised and ugliness is treasured. Interestingly, Bizarro World boasts a popular financial instrument called the Bizarro Bond, “guaranteed to lose money for you.”

The backdrop for this story gives Bizarro World a run for its money.

Imagine a place where…

Well, you needn’t imagine it. This was that very strange year known as 2005 and the place was the good ole’ US of A.

But don’t worry. Even if you resided elsewhere, we almost certainly exported these to a place near you.

Recalling this brings to mind an oft-used quote of Woody Allen’s:

This was a year in which money ran uphill.

Almost everyone in the real estate, lending, construction and related industries made a nice living just by showing up — from the spec home builder to the journeyman electrician to the girl making photocopies at the title company.

Those who brought something extra to the game enjoyed the gravy.

During this astonishing time, my wife decided to jump into real estate, after watching her energy trading markets implode in the post-Enron world.

She faced a challenge.

Unlike her previous industry where she had plenty of credentials and bountiful press, including a front page article in the Money section of the USA Today (12/11/01), she had no obvious competitive advantage coming into real estate.

But since money was running uphill, she got her license, jumped in and cashed her commission checks.

After a year of enjoying the fruits of being in the right place at the right time, we realized it was time to sit down and…

But how to do it?

How does a newcomer differentiate herself from the masses? Moreover, how can she turn her lack of experience into an advantage?

Smart marketers know almost any challenge can be broken down into a set of concrete steps. And our first step was to leverage an asset we didn’t own.

Almost immediately, she mentioned a technology-laden home that was several multiples more expensive than anything else in town. It was also a home with a major marketing challenge.

Since Tucson is far removed from the glitz of the Coasts — it’s a winter haven for frozen mid-westerners, an hour’s drive from Mexico — finding a buyer for a 17.5 million dollar home was no mean feat.

And from what my wife told me, the listing agent was spending far more marketing this property than most agents were making at the time.

You have to remember, this was 2005, the height of the housing bubble, and real estate marketing on eBay was a trend in full force.

And like anything else that’s trendy online, whether it’s eBay in 2005 or Facebook in 2010, the marketing opportunity lies somewhere between the overhyped to the underutilized.

So, Anjelina went to the listing agent with a simple proposition. “With you and your seller’s permission, I’ll market this property online at no cost to you and if I find a buyer, I’ll receive full commission as the buyer’s agent. Deal?”

Hard to argue with that. They wanted to get the place sold, so they gave her the green light.

Since this was over a half-decade ago and literally was a house ad, I’ll make a confession that I’d never make to my copywriting clients today.

The ad I wrote was a midnight write.

Yet, it was wildly successful because I unearthed the right hook and linked it to a trendy channel.

My main material to craft the ad was a coffee-table sized prospectus that looked more expensive than a small trailer home. Of course, it was loaded with the kind of gushy superlatives that makes copywriters like me cringe.

My first job was…

A strong hook or power concept is a must for even a chance at creating a winner. Fortunately, this home was so loaded with technology, that it leapt right out.

No time for fifty candidate headlines. This was a midnight write because we told the listing agent the ad would be published by morning.

As soon as I learned of the 602-page owners manual, I knew that was it. What was a barely legible footnote in the prospectus was transformed into a dynamite advertising hook.

The rest was straightforward.

I added captions to the photos and made a bulleted list of the most compelling features of the home. Features, not benefits — this was pure cut-and-paste.

At $13.5 million (not including the surrounding 10 acres of property) it was the most expensive piece of residential real estate on eBay for two out of three 30-day ad insertions.

The barrage of emails and phone calls from all corners was relentless.

Since the percentage of people with a net worth of over $50 million is small compared to the number of eBay users, most of the inquiries came from curiosity seekers, plus a healthy share of outright nutters.

Ultimately, the lead-gen process, though tedious, worked. Several qualified respondents took tours of the home. One even flew into town on his company’s private jet shortly after making a telephone inquiry.

With several thousand page views taking place each day, it wasn’t long before Anjelina’s name became associated with this property. And all she did was offer to help the seller and his agent market the property in a way they hadn’t considered, while spending almost nothing out of pocket.

Now, it was time to contact the state and local newspapers and let them know about the eBay auction.

All it took were a handful of emails before the state’s second biggest newspaper called. Within a week, there was a front-page article in the business section about the property and Anjelina’s role in marketing it on eBay.

Even though this happened over a half-decade ago, there are plenty of timeless marketing and public relations lessons in here.

The one that still  jumps out at me is what I call the “newcomer’s advantage.”

Most people are accustomed to looking at a lack of experience as a negative. And while it’s true there are some spin-resistant professions like heart surgeons and airline pilots, you can make a case in many fields that the old, entrenched way of doing things doesn’t work as well as a bold, novel approach. That was one of the clear take-aways from the article.

The Lifetime Advantage of Free Publicity

Besides achieving the major marketing advantage of having prospects come to you, after a front-page story like this hits, you now hold the lifetime advantage of being able to say: “as seen in The Wall Street Journal” or “as reported in The Oshkosh Northwestern.”

Oftentimes, you can parlay one story into many.

In Anjelina’s case, she was later written about in a real estate industry trade journal, as well as interviewed on a local TV station.

And the best part is, you don’t need to spend thousands on publicity agents or PR courses to do it.

In fact, the absence of a marketing or a publicity budget has often been an advantage for me because every time I’ve thrown money at a problem, it’s usually gone down the drain.

My PR approach today can be best described as a bootstraper with a budget. Here are my…

3 Guidelines For Getting Press For Yourself And Your Business

As you may have guessed, we didn’t sell the home. We came ever so close but as they say close only counts in horseshoes.

Had the home been sold, a $500,000 commission from this marketing and PR adventure would have made a great 80/20 case study but no complaints…we got plenty out of it.

And we weren’t ready to quit. A year after this, we gave it another go.

We suspected the sellers were using direct mail to contact people on the Forbes 400 list who lived in the States.

So, we asked ourselves, “who could they have overlooked that this home might make sense for?”

And someone came to mind.

Today, Carlos Slim of Mexico City is the world’s richest man, but at the time, he was relatively unknown in the States.

How do you get the attention of a billionaire like Carlos Slim?

The same way you get anyone’s attention — do something different, even slightly outlandish.

So, we FedExed him a black leather briefcase containing a prospectus for the home, an invitation to come and see it, and a letter making a case for how the home could be a valuable cross-border asset as a corporate retreat.

Though I never spoke to him directly, his English speaking secretary, Sylvia, was easy enough to reach.  A week after sending the package I rang her up and introduced myself. She immediately answered in a mixed tone of recognition and astonishment: “Oh, you’re the ones who sent the briefcase!”

And after a dozen more follow-up calls with replies like “Sr. Slim is in Switzerland and will examine your proposal on return,” he finally looked it over and declined.

Sylvia related his answer which was diplomatic and portentous — “Mr. Slim is not interested in making any investments in the U.S. real estate market at this time.”

Guess he knew about Bizarro Bonds.