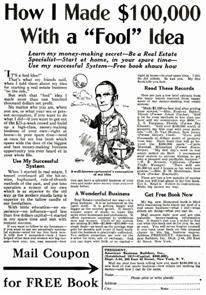 This lead generation ad for how to get-rich-in-real-estate appeared in “Popular Mechanics” just a few weeks before Black Thursday and the eventual market crash of 1929.

That $100,000 in today’s dollars would be about $1.3 million, so that was quite a claim to make.  Reminiscent of the real estate gurus of our not so distant past?

This is one of the first recognizable to the 21st Century marketer’s eyes, get-rich-in-real-estate ads and it was published by a company called American Business Builders.

This ad and their biz-op ads in general were in a word — phenomenal.

You get the feeling that a heavyweight copywriter, like Victor Schwab, had a hand in this but since so much of Schwab’s oeuvre has never been identified, we may never know.

Notice the interesting coupon with the year the company was founded and its business capital.

Once again…nothing new under the sun.