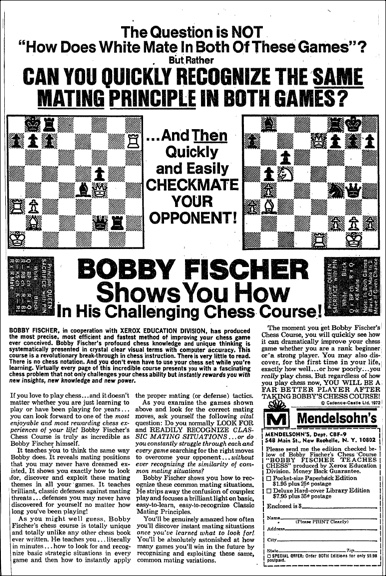 And after the World Chess Championship in Iceland in August of 1972, there was a tidal wave of demand for learning how to play chess.

The title had been held by Soviet players since 1948, so when an upstart kid from Brooklyn stormed on the scene in the late 1950s, and eventually challenged and triumphed against the might of the Soviet Chess School, it was a BIG deal.

More Americans found their way into chess because of the Fischer-Spassky match than any other event in history, even more than the Covid lock-ups… or was that lock-downs?

At the time, most ads for Bobby Fischer Teaches Chess sported nothing more than a picture of the book and an order coupon or a list of booksellers where the prospect could buy the book.

That’s all that was needed to mine the demand for the timeless battle on the 64 squares, made omnipresent by the massive David vs. Goliath story — Bobby from Brooklyn versus the might of the Soviet chess machine.

“Can You Quickly Recognize the Same Mating Principle in Both Games”

I feel this ad could have been even stronger, but considering most insertions needed next to no copy to get reams of orders, this insertion is still a memorable standout.

Unlike the outstanding power of demonstration ads for speed reading courses from Reading Dynamics, (also at their high water mark in the early 1970s) prospects for chess courses at the time (and today as well) didn’t necessarily know the language of chess or perhaps, even how the pieces move. So some supplemental graphics would have aided in making the sale, since the clunky descriptive chess notation of the time likely resulted in some prospects turning the page.

This ad succeeds in selling the idea of pattern recognition. If this had been a full page ad instead of a fractional insertion, the copy could have been expanded to…

Just as we’re obliged by the general rule to make the simple more complex.

In any event, Checkmate!