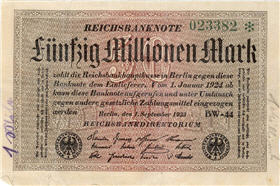 (Note 4/25/11) I wrote this a little over 3 years ago and decided to revisit it based on the combination of rising oil prices and the fast approaching U.S. debt ceiling. Whether one’s an historian, marketer, or just a keen observer, awareness of these cycles puts you ahead.

Compared to many other professions, I look at direct marketing as a godsend in times like these.

Unlike traders, for example, marketers have the luxury of choosing a Plan A and a Plan B.

Here’s a 50-million-mark, Weimar Republic banknote from the year 1923 — worth about one U.S. dollar when originally printed. Nine years earlier, such a note would have been worth $12 million.

So if a person had 50 million in 10 mark notes in 1923, he’d literally need a wheel barrel full of money to buy a cup of coffee.

Is the United States (and the rest of the world) headed in this direction?

Who knows? Who cares?

Since the only group of people with any statistical accuracy at predicting the future are meteorologists — and we know how often they’re wrong — we as marketers are best suited toward one aim: “entering the conversation already taking place in the prospect’s mind.”

If there were only one marketing commandment to live by, it would be these words of Robert Collier from a half-century ago. That’s because Collier’s timeless directive was as true in 2,000 B.C. as it is in 2008.

Take the bountiful examples of this today in the declining U.S. housing market. Many homeowners owe far more than their homes are worth and find themselves staring at default each and every month, as their mortgages adjust to higher rates. What do these people want, far more than anything else? To get out from under the pain of meeting these impossible obligations.

So, like a parent scooping up a fallen child on the playground, in steps San Diego company, You Walk Away, LLC. As their name suggests (and for a flat fee of $995), they help people walk away from their homes and cede them to the banks for forclosure.

As an enlightened consumer, I don’t see what the $995 payment entitles me to that I couldn’t do for myself, gratis. As a marketer, I take my hat off to this company for tapping into this abundant pain and appearing to offer a speedy solution.

Another example of “pain tap marketing,” for which I felt some recent, acute pain myself, is tax preparation. Take the most dreadful return you’ve ever filed, multiply it by 20 and you’ll have some idea of what a hyperactive day trader’s return is like. (No, I’m not a trader, though I considered starting a fund that takes the opposite positions to ones I have in my portfolio.) When you’re filing jointly, there’s no distinction between your spouse’s portion and your own. And the I.R.S.’s wash sale requirements, which active traders face, are a nightmare for even the best accountancies.

Their website is crying out for an online marketer’s red headline injection though.

Stressed Out DAY TRADERS: Gain an extra month for every year of your remaining life expectancy…or you pay us nothing