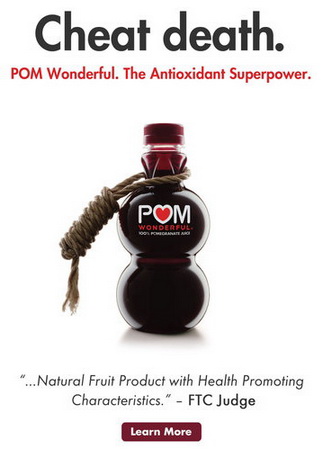 The banners which hit the homepages of massively trafficked websites last week drove visitors to their website, www.PomTruth.com.

The headline on their landing page: FTC v. POM You be the judge.

And here’s the lead:

You may have heard that the Federal Trade Commission sued POM Wonderful for false and misleading advertising on grounds that science did not support POM’s health claims. But what you as a consumer of POM need to know is that the FTC judge agreed that POM Wonderful 100% Pomegranate Juice and POMx do provide significant health benefits. Here is what the judge said in his own words.
“Competent and reliable scientific evidence supports the conclusion that the consumption of pomegranate juice and pomegranate extract supports prostate health, including by prolonging PSA doubling time in men with rising PSA after primary treatment for prostate cancer.”
– Judge Chappell, Chief Administrative Law Judge, FTC

You can find just about every conceivable major advertising claim related to health in the collection of print ads on the left sidebar, “See the Ads for Yourself.”

The battle between Pom Wonderful and the FTC should get very interesting over the next few months and will likely trigger a wider discussion about The Dietary Supplement Act.

What impact this has on direct response advertisers is anyone’s guess.

(Note: I am not an attorney, nor do I play one on the Internet. I’m looking at this purely from a direct response advertiser’s point of view… and frankly as an admirer of someone with the cajones to poke a stick in the eye of the FTC.)