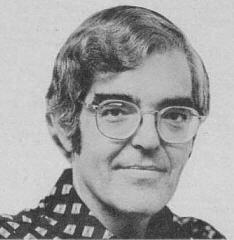 Paul Michael was one of the major mail order players from the 1960s-1980s after a stellar start at Greystone Press.

Among other things, he pioneered the “lift letter.” I just dug up a few of his brilliant promotions and an article about him from the mid-1970s in The Capitalist Reporter.

Three lines stuck with me from this interview.

“I am only valuable when I am creating.”

“They [customers] all want the same thing – a magic button to push that will make them thinner, more beautiful, richer.”

“He [Michael] has already decided the precise shape and structure of the book which has to live up to his ad rather than the other way around.”

Until he took a flight back from Las Vegas recently, mail order copywriter Paul Michael had talked to millions of people through his ads — but never met a single one of them. He knew that out there somewhere they were listening to him. The high pulling power of his ads proved that much. He also knew what it was they were listening to: “They all want the same thing – a magic button to push that will make them thinner, more beautiful, richer.”

Michael’s craft lies largely in making such a button looks like it works; and making it say, “Yes, sir; yes, madam, press me and all your cash – or weight, or golf, or ugliness – problems are over.”

And it has proved a profitable craft, too. Michael recently purchased a ten-room apartment on the 19th floor on a landmark building on Central Park West. From here, you can see most of Central Park (the reservoir, Sheep Meadow, the Delacourt Theatre), a large slab of the East Side and beyond that, the Triborough, 59th Street and Williamsburg bridges. On a clear day, it seems like you can see forever. But for all that, he still never knew to whom he was talking.

Until that flight. The man sitting across the aisle from him in the first-class compartment was thumbing through a magazine and stopped to read one of Michael’s ads about how to improve one’s golf game.

The craftsman in Michael made him lean over and watch as the man progressed through the copy. “I wanted to see how much he read – to see if my copy lost him, and if so, where. I wanted to see just where he’d stop reading. That way I’d know just where I’d have to revise the ad, rework the copy.”

But the man, says Michael, read all the way through, tracing every word with his finger. He even read the coupon which inevitably accompanies all mail order ads. Fascinated, Michael watched as the man took a furtive look towards the stewardess, and then ripped the ad from the magazine, folded it, and put it in his pocket.

It was a tremendous moment for Michael. He leaned across the aisle and introduced himself. The reader of the ad turned out to be a vice-president of the Chase Manhattan Bank. And typical or not, he was the first mail order customer Michael ever met face-to-face.

Since then he has met many because of his book, the Paul Michael Weight Loss Plan.

The people he meets now introduce themselves. Among them have been a salesman at Sak’s Fifth Avenue, (who said that thanks to Michael, he had lost 21 pounds) and a crowd of people outside Gallagher’s, a fashionable restaurant and sportsman’s watering whole on Manhattan’s West Side. Soon he will meet many more because he decided to take to television and do on camera sales pitches for the book. None though, will ever give him the pleasure he got when he met the banker who purloined his ad.

Michael’s specialty is selling books before they are written. If the selling — his ad — gets a good response, the book is assigned to a writer.

This is less chaotic than it sounds, for by the time he sits down to write the ad, Michael already knows just about all there is to know about the subject, either through his own research or through the help of experts. He has already decided the precise shape and structure of the book which has to live up to his ad rather than the other way around.

If the response is good, he hires somebody to write the book. He pays a flat $2,500 fee – half on assignment, half on acceptance. The writer has 60 days to wrap it up. If the fee sounds low, Michael points out that the books are written as moonlighting projects by persons (usually Madison Avenue copywriters) who already hold regular jobs. If 60 days sounds fast, it isn’t. His weight loss book took a total of 18 days to write, edit, typeset, print, bind and publish.

It was one of the “I did it myself” ilk of mail order books which from time to time hit the jackpot.

Fat for 36 years of his life, Michael says that he got up one morning considered his obesity (by then he weighed 302 pounds), said to himself, “I had enough of this s***,” and went on a diet. In 56 weeks he had lost 132 pounds.

Realizing that he might well find the market for a first person account of this, he wrote the ad. The response was phenomenal – and he started writing.

So successful has his book been that Michael recently negotiated a deal with a publisher to produce a hard back version for regular, across-the-counter retail sales — a first in the mail-order business.

Speaking of firsts, Michael once ran an art auction via an ad he wrote. Having obtained access to a collection of graphics by famous artists, he went out looking for bids — his copywriting taking the place of the auctioneer. He sold a Picasso for $3,127, a Dali for over $500, seven Miros for $700 and up. (He had 12, but for five of them the bidding fell short of his minimum price), and dozens of others in the $20, $30, and $40 range.

Though, this particular concept — selling art by mail order — was original, Michael believes that originality is rare. Most ideas, he says, have already been thought of.

He takes a laissez faire view of knock offs, a trade expression for lifting another person’s idea and using it. Many of his own, even if they were really “his” according to his own theory, have been lifted. One example is the “Frankly I’m puzzled…” head he wrote some years ago; it has been frequently used by others. He cheerfully admits to having used Joe Karbo’s “The Lazy Man’s to Riches” with a “Lazy Man” ad of his own. Shortly after knocking off Karbo’s head, he met Karbo who he said bore no ill will. (Even so, Michael paid for dinner.)

On one particular day recently, however, Michael was angry over a knock-off, which he felt crossed the boundaries of propriety. He had written an ad about how to win at the track. An almost identical ad appeared soon afterward — almost identical in its head, its copy, and its illustration. It also told how to win at the track — and the fact that it involved a similar product was, in Michael’s opinion, a violation of ethics.

Michael came to the mail order business by a circuitous route. When he got out of the army, he used his GI Bill to go to law school. He passed — but, he says hated law. When a friend suggested that instead, he become an off-Broadway producer, he leapt at the opportunity.

He produced two plays: “Time of the Cuckoo” and “Clearing in the Woods.” Both were acclaimed by the critics, and between then, won five coveted Obie awards. Michael made $65 a week.

From there, he moved to journalism, writing for large circulation magazines, and then becoming a foreign correspondent. It was when he returned from Israel that he got into copyrighting, first at Doubleday, and then at Greystone. 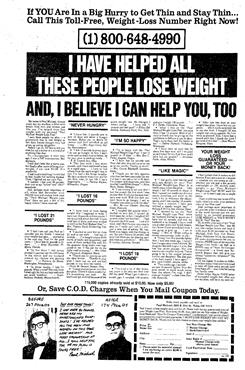 Today, he’s involved in a new venture, with a colleague who operates out of Tulsa, Oklahoma. Once a month, they get together for what Michael observes as a brainstorming session. One month, Michael visits Tulsa, the next, his colleague comes to New York. Otherwise, they have hardly any overlap: the colleague deals with the business end; Michael, with the creative.

“I am only valuable when I am creating,” Michael says – which means when he is thinking up concepts, researching them, typing copy to sell them.

He works alone in a suite off Madison Avenue, which is big enough to accommodate four (and four before-the-Michael-diet, at that) other persons. A desk by the entrance stands empty even though it would be a perfect location for a secretary with pretty knees.

“I used to have a secretary,” he said. “But I found I was spending time thinking of things for her to do so she could earn her salary. If I had somebody to manage her and if I didn’t have to manage the manager, a secretary would be okay. But I don’t.” And, he repeated, “I am only valuable when I am creating.” So Paul Michael works alone. He keeps strange hours — certainly by the standards of his friend at Chase: Michael’s in at 7 a.m., sometimes for 18 hour days, sometimes to quit early and catch a mid-day movie.

Next to his desk is a huge aquarium, and the walls of his office and those of the empty offices around him are hung with photographs that he shot in New York and overseas. He used to do his own printing, and he did fine work, but he quit that for the same reason he let his secretary go.

By 8 a.m., his ashtray is full and a carton of Camels sits on the credenza next to the typewriter — within easy reach. His eight-year-old daughter (he has another, aged six) wants him to quit smoking. Maybe he will one of these days: “It’s just a question of psyching yourself into it,” he says. When Paul Michael does quit smoking, you can bet he’ll get a bestseller out of it.

And last, there’s a swipe file of Paul Michael’s print ads in this post.