One late summer evening, two copywriters sat down at their keyboards to craft sales letters for almost identical products.

They were very much alike, these two copywriters.

Both had years of experience writing every type of ad and were dynamos at selling to their core markets.

Both writers were also dedicated students of direct response marketing and were up on the latest trends and techniques for making their clients (and themselves) ever larger profits.

But while one writer spent an entire week on writing and edits, his leisure-loving colleague cranked his final draft out within hours of sitting down that first evening.

And here’s the capper.

The ad that was written in mere hours buried the week-long effort by many multiples.

What Made The Difference

While one writer spent days building the perfect lead, piling layers of proof into his ad and extracting every conceivable hot button to boost response…

The other writer had a hunch that a good, old-fashioned story was called for to sell the dickens out of his particular product.

And he was right.

But where did he get such a brilliant idea?

No doubt you detected the above story wasn’t conjured up by me but by the legendary copywriter, Martin Conroy, whose direct mail letter about “two young men” sold over a billion dollars worth of Wall Street Journal subscriptions over the course of three decades.

Conroy could’ve just as easily taken a mainstream, “quant’s” approach to selling The Journal, using the kind of cold hard data and statistics the paper is famous for.

But he didn’t do that.

This Guy Is Trying To Sell Me Something!

Just think of how many times a day people take “evasive maneuvers” when thrown into a sales situation.

The average prospect has a little voice inside screaming: “En garde!”

And it’s very difficult to sell once that’s happened.

One way around this is to tell a story.

And the great thing about telling stories is they don’t necessarily need to relate to the product we’re selling.

Nowhere does the ad state that the successful man was a Journal reader and the other wasn’t.

And just as importantly as getting our prospects to read our ads without their sensors buzzing, storytelling has almost magical powers of suspending disbelief.

A good story — and hopefully one that’s also relevant to our product — sails past left brain logic and scrutiny and into that much more welcoming realm for selling of right brain feeling and imagination.

They were left with only one thought: I want to be like the successful guy in the ad!

I’ll let you in on a little secret.

As triumphant as Conroy’s ad was for The Journal, he didn’t come up with the story of “two young men” any more than I did “a tale of two copywriters.”

As a matter of fact, he lifted the story line from another famous 20th Century ad man, Bruce Barton.

Barton wrote a space ad in 1919 for his long time client, The Alexander Hamilton Institute, the premier self-help and business development entity of the early 20th Century.

The headline for the ad was “The Story of two men who fought in the Civil War” which opened like this:

“From a certain little town in Massachusetts two men went to the Civil War. Each of them had enjoyed the same educational advantage, and so far as anyone could judge, their prospects for success were equally good.

One man accumulated a fortune. The other spent his last years almost entirely dependent upon his children for support.”

If you look at Martin Conroy’s and Bruce Barton’s openers side-by-side, it’s clear they were created from the same mold.

Just as Conroy was inspired by Bruce Barton — Barton took his plot cue from a successful ad written the year before — with what should now be familiar deck copy: 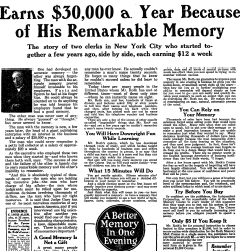 “The story of two clerks in New York City who started together a few years ago, side by side, each earning $12 a week.”

This 1918 ad sold the memory course du jour, the Roth Memory Course, and told “the story of two clerks.”

The clerk “with the memory” went on to become the head of a giant publishing enterprise. The other became “a petty bill collector.”

So much for creativity!

The memory ad hails from the ad agency of Ruthrauff & Ryan, which was a veritable all star team of copywriters, including on staff at various times: John Caples, Maxwell Sackheim, Victor Schwab, Wilbur Ruthrauff and Lillian Eichler Watson of Book of Etiquette fame.

We may never know who among these world-class writers actually wrote the ad.

And it really doesn’t matter.

Story Telling Is In Our D.N.A

It’s likely the “story of two young men” was originally etched on a Sumerian cuneiform tablet.

And it’s made its way down our human story chain over the course of centuries.

It’s based on the age-old plot of rivalry.

Like the “two young men” graduating college, I may not be in an actual contest with my neighbor but you’d better believe I’m checking to see if the car in his driveway is faster, shinier or more expensive than my own.

That car in his driveway is just one of life’s many score sheets.
As William James said:

There is very little difference between one man and another; but what little there is, is very important.

So, how do you incorporate the right story into your ad copy?

Of course, there are no hard and fast rules, otherwise fiction writers would be calling the shots here, instead of copywriters.

One of the best ways is to look at successful ads that tell stories and notice how the plot relates to the product being sold.

The Wall Street Journal, The Alexander Hamilton Institute training and the Roth Memory Course were products with big promises, so the rivalry plot works well here.

Another famous ad that told a story was that of Charles Atlas, where the skinny kid in the ad is humiliated in front of his girlfriend when a beach bully kicks sand in his face. The skinny kid orders the Atlas course, gets ripped and returns to the beach to pummel the bully.

This is the revenge plot in action and it worked like a charm to sell millions of Charles Atlas Courses.

And if you really want to get into story telling for copy, here’s a great book to consider for your bookshelf.

It’s called 20 Master Plots And How To Build Them.

If you’re interested in what motivates middle aged men to watch movies like Rocky and The Karate Kid for the umpteenth time at 3:00 am…or why young children are endlessly enchanted by Cinderella, you’ll find 20 master plots in here to get you going.